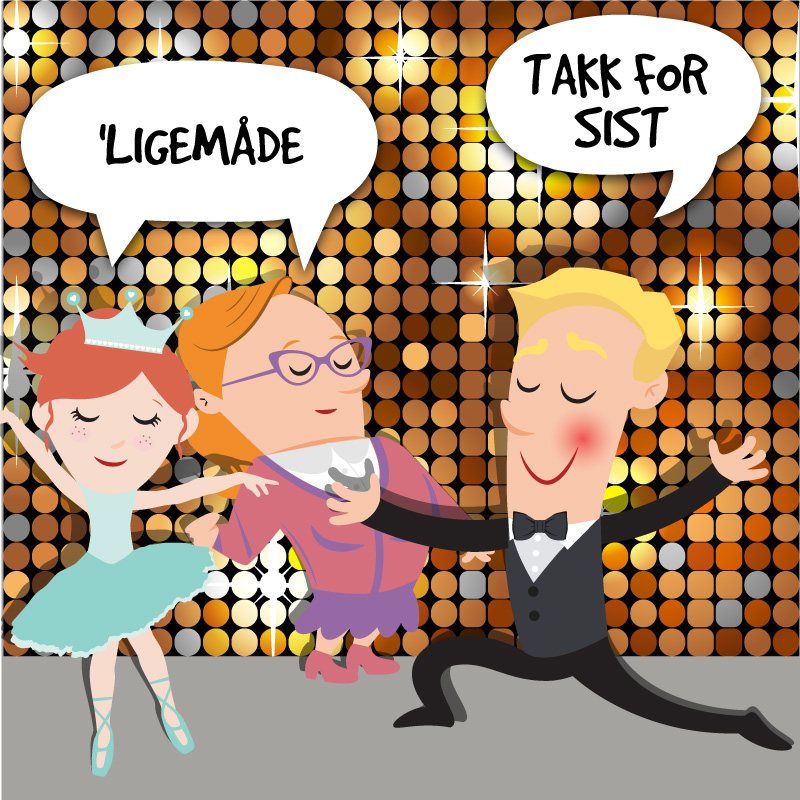 Meeting and greeting people is a bit like dancing. When Tor enters the dance floor, he feels for the rhythm, then he knows which step to take; whether to lead or to follow. Today, Tor will show you his three favorite moves.

Now you too can hit the verbal dance floor with confidence in your greeting technique. Remember: leading and following are equally important !

The two main points to remember from Part 1:

There is the obvious exception:

But you are ready to go beyond the "barking dog" level, right ?

You may be asking yourself:

What exactly does Takk for sist mean?

When should I use Takk for sist?

How do I respond to Takk for sist?

Most greetings simply acknowledge someone’s presence. Takk for sist goes deeper. Takk for sist is an important way of creating or maintaining a human connection.

We recall the setting en the entire occasion of the last time we were together. Takk for sist acknowledges our common memory and the relationship and strengthens it further. I often say Takk for sist to my weekly students at Lingu, for example. It's a nice thing to do ...

Most often a little time has passed, a week or two, a month, maybe more…no exact rules here.

Spelled out fully with modern Norwegian orthography, it would actually be “I like måte”.

But to be honest, I have never heard anyone actually say the k and the t - and rarely the “I“. So I’m giving you the insider scope here - and so I use the traditional “phonetic” spelling.   You should really get used to saying

Takk for i går

No need to say Takk for igår to your colleagues every morning when you come to work.

After all you did see each other at 4 pm yesterday! Takk for igår refers to some kind of special occasion; an office party, a dinner or a social outing. How to answer?

Exactly the same way as to Takk for sist … (and you do know that one by now, right?)

I’ll leave you with some other examples of verbal dance steps: Ballroom dance (pretty formal, in other words)

(It would be hard to be more enthusiastic …too much, perhaps?)

The Last Dance  (heard on the T-bane in Oslo recently)

Now you’re ready to Face the Music and Dance!